COCONUT GROVE, Fla. (January 29, 2019) — Today’s forecast for Day 1 of the 2019 Hempel World Cup Series Miami was for a light breeze that would eventually settle into a southwesterly direction. The term, settle, however, is relative. When the wind flows from the mainland onto Biscayne Bay, it’s not known for being reliable.

“Once the breeze is out of the west here, it’s anything goes,” says three-time Olympic sailor Stu McNay (Providence, R.I.), who is competing in the Men’s 470 class with crew David Hughes (Miami, Fla.). “We have a pretty good meteo team, and they did suspect that the breeze would be around 215, 230 [on the compass] and that happened. It was within range of what we expected, but in this breeze direction, it’s hard to say you expect anything.”

The capricious breeze made for a stressful opening day of the regatta, with over 650 athletes from 60 countries in 10 classes all looking to start this event—a key milestone on the road to the Tokyo 2020 Olympic regatta—on the right foot. Regattas can’t be won on the opening day, but they can sure be lost.

Fortunately for McNay and Hughes, they avoided any major pitfalls on the water and stand in third place, of 37 boats, after two races.

“We rolled a third and a fifth today.,” says McNay. “We did the big picture things right, but made a couple of small errors. We did lose a couple of points. Dave and I have been sailing for a long time, we’ve raced in Miami for years. It’s a challenging venue, so we’re always glad when we walk away from a shifty day like this with scores we can carry forward.”

For Hughes, this regatta as close to a home event as he’ll ever get, something he tries not to take for granted.

“This is always a lovely event and always kind of the way to start the year for us,” he says. “I live in Miami, so it’s got a special meaning. It’s a bit of an added stress because it is a home event, and we are always looking to be proper hosts to everybody who comes here, off the water, at least. But it’s wonderful because all of our international friends come to our home. It’s a treat and for us this is just a staple of our sailing and our Olympic careers.”

With a seventh at last summer’s Hempel Sailing World Championships in Aarhus, Denmark, McNay and Hughes qualified for the United States for the berth in the Men’s 470 class at the Tokyo 2020 regatta. Now they are focused on making sure they are the team to claim that berth. They’ve been down this road before, but that doesn’t make it easy.

“We’re trying not to be distracted, trying to keep our priorities in line,” says McNay. “Not let one piece of equipment become distracting, not let one detail of a skill become distracting. Give our prioritization to each item, as it deserves, as it will help us most, which is a challenge because perspective is the easiest thing to lose when your head is this deep in something.”

The second-placed American team is Lucas Calabrese and Jack Parkin in 11th. Calabrese won a bronze medal for Argentina in the London 2012 Olympics—he’s now sailing for the United States—while Parkin is a former youth world champion. The team is new, but could pose a threat for the U.S. berth in the class. 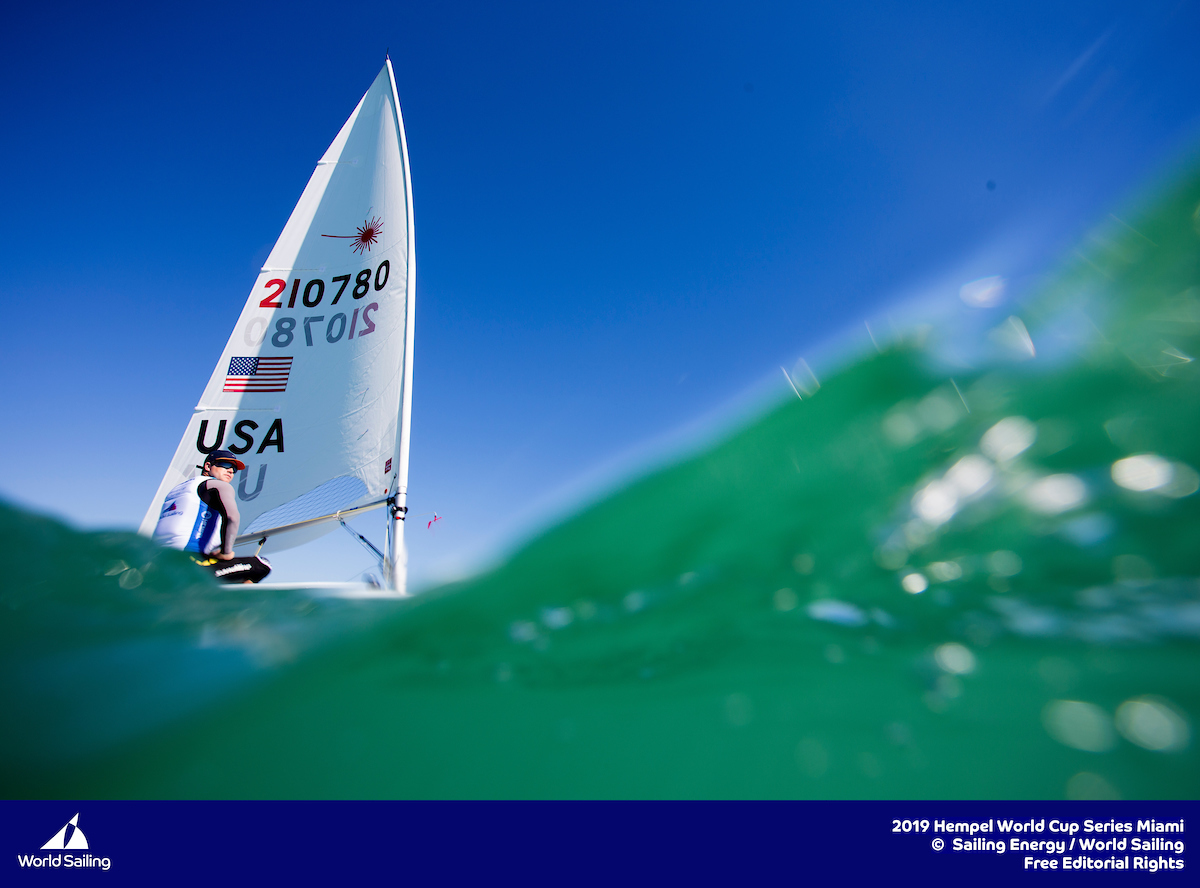 In the Laser class, both Chris Barnard (Newport Beach, Calif.) and Rio 2016 Olympian Charlie Buckingham (Newport Beach, Calif.) had a strong start to the regatta and sit in amongst a knot of five sailors with 13 or 14 points. With 101 boats in the fleet, the Lasers are sailing a qualifying series for the first two days before splitting into Gold and Silver fleets for the remainder of the regatta.

Luke Muller (Fort Pierce, Fla.) made the most of today’s lone race in the Finn class. He finished third while Rio 2016 bronze medalist Caleb Paine (San Diego, Calif.) struggled with a 23rd. 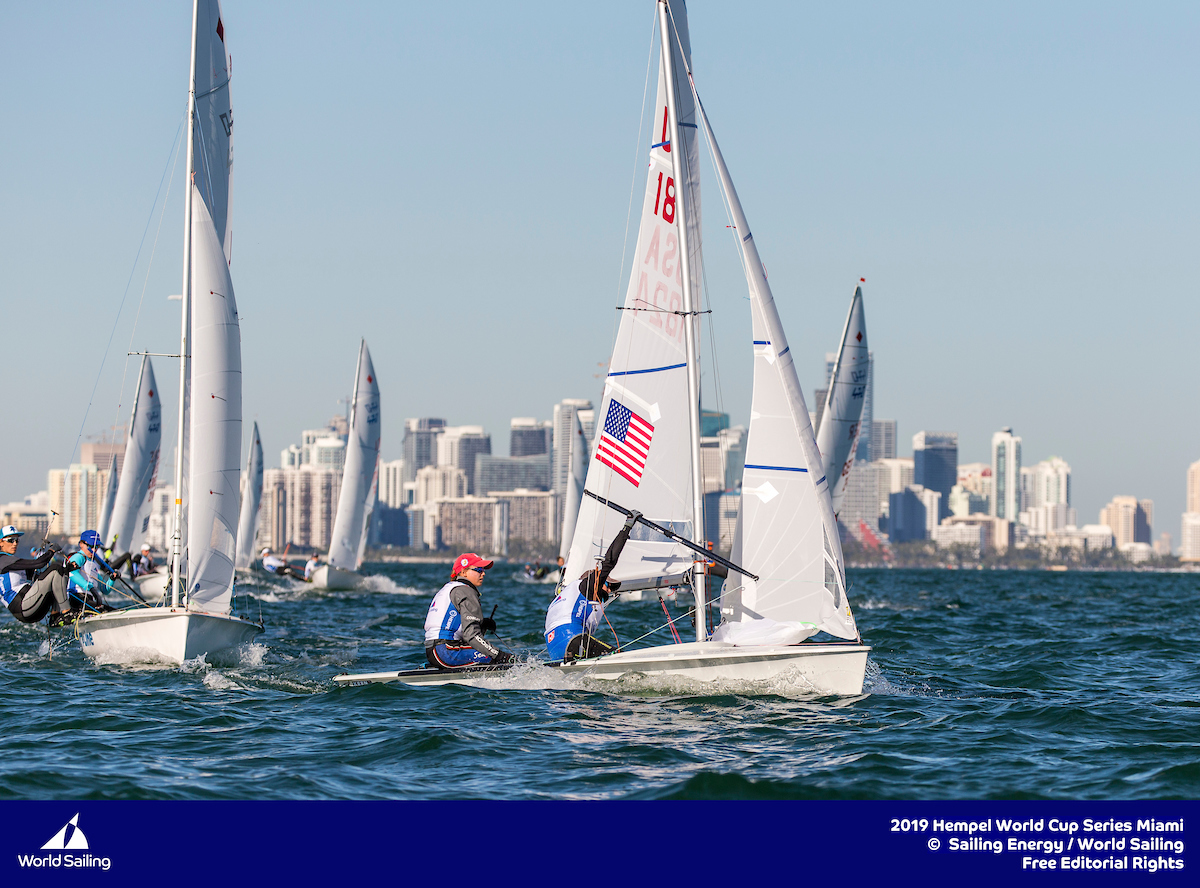 Youth World Champions Emma and Carmen Cowles (Larchmont, N.Y.) showed little fear of the grand stage, putting together two top-10 finishes in the 28-boat Women’s 470 class. That places them in fifth, with another pair of sisters, Atlantic and Nora Brugman, the next highest American team in 12th.

The Nacra 17 class features seven American teams looking at the lone U.S. Olympic berth. Sarah Newberry and David Liebenberg (Livermore, Calif.) have the inside track in this regatta after a solid trio of top-12 finishes. They sit in ninth place overall. Ravi Parent (Sarasota, Fla.) and Caroline Atwood and 2016 Olympians Bora Gulari (Detroit, Mich.) and Louisa Chafee (Warwick, R.I.) are close behind in 13th and 14th, respectively.

In the RS:X divisions, 2016 Olympian Pedro Pascual is 36th in the men’s division while Dominique Stater is 26th in the women’s.

Racing starts tomorrow at 10:30 am on Biscayne Bay and will run through the Medal Races in all 10 classes on Saturday and Sunday, with a live broadcast available on World Sailing’s YouTube and Facebook channels and also on a Jumbotron in Regatta Park in Coconut Grove during the Hempel World Cup Series Miami Festival.