Not long after the start of the second Finn class race on Day 3 of the 2019 Hempel World Cup Series Miami, a nasty line of storm clouds moved southwest over the racecourse on Biscaye Bay and the skies opened up. The wind went haywire and Luke Muller (Fort Pierce, Fla.) went back in time.

“I applied a little of my storm-cell knowledge in the bay and that was kind of fun, bringing me back to my youth sailing days,” he said. “There was a massive storm cell. We had good pressure for the first half of the upwind and then it started just dropping out of the sky and coming back up and we were going through 40-plus-degree windshifts. But I was really just focusing on staying in the pressure and that seemed to go alright.”

Muller rounded the first mark in third, took over the lead on the downwind leg and held on for his first win of the regatta. While his other two finishes today were both outside the top 10, consistency has been tough to come by in the 29-boat Finn fleet, and Muller, with five of 10 full-fleet races in the books, is sitting comfortably in fifth place.

“It was pretty tricky, every race was different, and I just tried to have an open mind to the changing conditions the whole day,” he said. “The last race, the wind came up, we stretched our legs, it was super difficult and I made some passes and lost some boats. But happy with the day overall.”

For Muller, this regatta serves as something of a launching point for the long final leg of his Olympic campaign.

“I took time off from [Stanford University in December 2017], and was campaigning full-time for nine months,” he said. “Then I went back this fall for another term and now I’m just back full–time and I’ll be full-time until Tokyo. I’m really excited to be able to dedicate myself to the campaign and I’m working with a great team with Luther [Carpenter, U.S. Finn coach] and Caleb Paine (San Diego, Calif.). US Sailing Team as a whole is gaining momentum, and we’re really glad that we have all the support that we have.”

Paine won bronze, the United States only sailing medal, at the Rio 2016 Olympics. So far, Paine has struggled in this event, though he did trend in the right direction today with a ninth and 11th in the last two races. With two days of racing remaining before the double-points Medal Race on Sunday, there is plenty of opportunity for Paine to climb back into the top 10, if not higher. 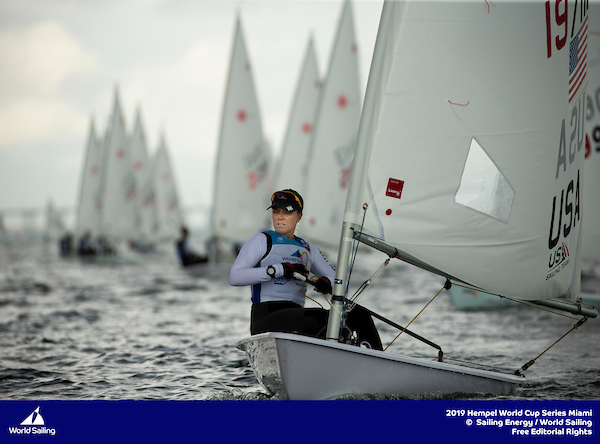 While two-time Olympian Paige Railey (Clearwater, Fla.) grew up on Florida’s other coast, she’s spent plenty of time on Biscayne Bay over a career in the Laser Radial class that is closing in on two decades. Still Railey said this week has been as mentally challenging as any she can remember.

“Honestly the racing is so incredibly hard, everybody is all over the place,” said Railey. “Coach told me whatever I do, don’t panic in the race and just keep plugging away, and that’s my game plan. You can’t predict anything out there because everything’s changing so much. There’s downwind legs turning into reaches. Reaches turning into an upwind.”

“Plugging away” scored Railey a second in the first race and a first in the third. She was disqualified from the second race for starting a hair early. But Railey, who is an expert at focusing on the big picture, was able to take some positives from that disappointing score.

With the throwout applied, Railey is second by just two points to Alison Young (GBR). Dongshuang Zhang (CHN) is third and will be one to watch as Railey noted that Chinese sailor may be the only one in the Laser Radial fleet with a speed edge.

Erika Reineke (Fort Lauderdale, Fla.) also had a solid day, with a fifth, seventh and 24th. She is seventh overall, but just nine points out of bronze. 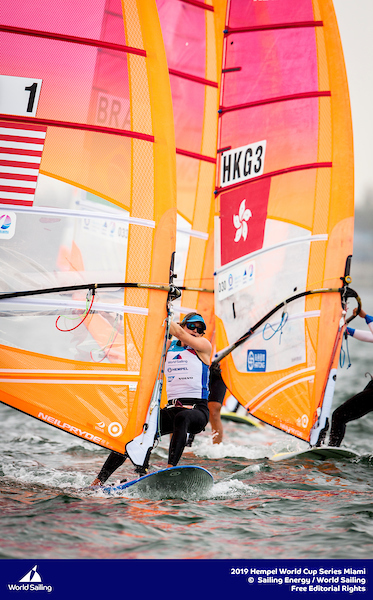 Farrah Hall (Annapolis, Md.) had her best race of the regatta, a 21st, to open the day and she is currently 28th in the Women’s RS:X class. Hall represented the United States in the London 2012 Olympics.

Rio 2016 Olympian Pedro Pascual also had his best individual performance of the regatta today, with a 12th in the second race. He’s currently 36th of 54 in the Men’s RS:X class. Both of the RS:X fleets will aim for three more races tomorrow before Saturday’s Medal Race.

Stu McNay (Providence, R.I.) and David Hughes (Miami, Fla.) finished second in the last of two races for the Men’s 470 fleet. While their first race was a disappointment, a 15th in the 37-boat fleet, the veteran duo is now tied on points for first place with Anton Dahlberg and Fredrik Bergström (SWE). With just four of 10 scheduled full-fleet races completed, however, there’s a lot of racing left for this fleet. Lucas Calabrese and Jack Parkin are also in the top 10, after a solid 11-4 today.

The Women’s 470 fleet is also sitting on four races, two behind schedule. Atlantic and Nora Brugman are the top American team in 12th. Carmen and Emma Cowles (Larchmont, N.Y.) are 15th.

Nevin Snow (San Diego, Calif.) and Mac Agnese (Fort Lauderdale, Fla.) had two strong races today and two they’d probably like to forget. Nonetheless, they are still in the top 10, with one more day of racing before the fleet is knocked down to the top 10 teams for Saturday’s Medal Race. Ian Barrows (St. Thomas, U.S.V.I) and Mitchell Kiss (Holland, Mich.) are 14th.

Stephanie Roble (East Troy, Wis.) and Margaret Shea (Wilmette, Ill.) dropped a few places today, but are still firmly in the top 10 in the Women’s 49erFX class. Paris Henken (Coronado, Calif.) and Anna Tobias have moved within reach of qualifying for the Medal Race. They are currently 13th.

Rio 2016 Olympians Bora Gulari (Detroit, Mich.) and Louise Chafee (Warwick, R.I.) have taken over the top spot among the seven American teams competing in the Nacra 17 class. They are eighth. Sarah Newberry and David Liebenberg (Livermore, Calif.) are ninth, just two points behind. Ravi Parent (Sarasota, Fla.) and Caroline Atwood are 13th while Riley Gibbs (Long Beach, Calif.) and Anna Weis won a race today, finished sixth in another, and have moved up to 15th overall.

Racing resumes once again tomorrow at the earlier time of 10 am. The 49er, 49erFX, Nacra and RS:X fleets will sail their final day of qualification ahead of Saturday’s Medal Races.