Not All That Shines is Gold, Silver or Bronze at Hempel World Cup Series Miami

The first day of Medal Races at the 2019 Hempel World Cup Series Miami came and went without too much noise from the U.S. Sailing Team. Just three American teams qualified to compete in one of the five Medal Races held on Biscayne Bay earlier today, and none started their respective final races with a shot at a medal. But look beyond the podium in Regatta Park and champagne celebrations and there was a lot to be positive about from a regatta where the wind was capricious at best and downright mystifying at worst.

Sarah Newberry (Miami, Fla.) and David Liebenberg (Livermore, Calif.) started the Nacra 17 Medal Race in 10th place and that’s where they remained once the boats finished. For a team that’s still getting their footing on the tricky foiling catamaran, however, this was a breakthrough performance.

“We started sailing together a year ago and we spent the last year trying to get the basics down and get to a point where we could really race with the fleet.,” said Newberry. “After a few months working with the U.S. team, mostly on speed, this fall, it was great to come into this regatta and see we can start focusing on racing and building our skills in that department now that we can get around the course. We’re really happy with our improvements as a team and it is exciting to make the Medal Race. That’s a nice sign that you’re doing it right.”

The Nacra 17 class is sailing’s only coed class. Each team must have one man and one woman, though who skippers and crews is up to each team. Newberry was the only female helm in the Medal Race in Miami. 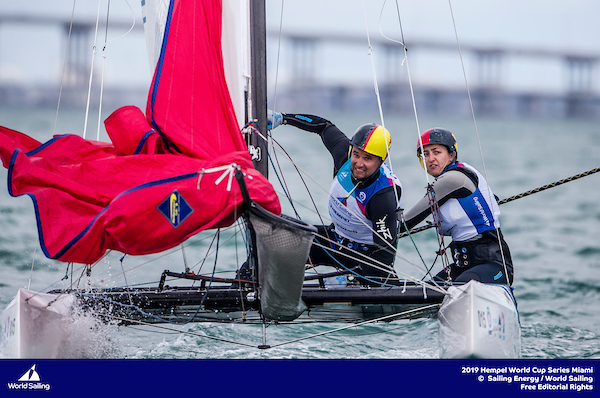 “There are a limited number of female helms internationally,” she said. “I think that historically that’s been more about experience. There are a lot of very experienced male helms in this fleet that have come from a high-performance background or the Tornado or other Olympic classes. I think over the next eight years you’re going to see more and more female helms in the class.”

Having a larger male in the crew position can be an advantage. Hoisting, trimming and dousing the spinnaker are among the most physically demanding tasks on the boat.

“That being said, the female crews out here are such bad asses,” she said. “In some conditions, it’s awesome to be set up the way we are. We know at top mark roundings and some of the more explosive areas of the racecourse for the crew, Dave has what it takes to really out perform some of the other teams. So that’s a nice thing to have in your back pocket.”

The trials for the U.S. berth in the Tokyo 2020 Games won’t start until later this year. In the meantime. Newberry is looking forward to more cooperative training with her fellow American Nacra 17 sailors.

“The Nacra squad is going quite well for the U.S.,” she said. “We’re all traveling together this spring and training together and working with the same coach. Four teams going to Palma, Hyeres, Genoa, Weymouth for our Europeans, so what I see is more collaboration and more skill building and working together as a team to keep improving the U.S. level until the trials. Hopefully we’ll still all be in a good place as a squad at that point.”

Rio 2016 Olympics Bora Gulari (Detroit, Mich.) and Louisa Chafee (Warwick, R.I.) also competed in the Medal Race. The finished seventh in the race and eighth in the regatta.

Stephanie Roble (East Troy, Wis.) and Margaret Shea (Wilmette, Ill.) picked up what was available to them in the 49erFX Medal Race, finishing sixth and securing a ninth overall. Roble and Shea were among the regatta leaders after three races before struggling in the second half of the event. But when an invite to the Medal Race was on the line, they pulled out another strong finish in the final full-fleet race and qualified by three points.

In tomorrow’s Medal Races, which will once again be streamed live via the Olympic Channel app and on OlympicChannel.com, two Americans will start in full control of their medal destiny.

Luke Muller (Fort Pierce, Fla.) won today’s only race in the Finn class and will start tomorrow’s Medal Race wearing the red bib indicating he is currently in the bronze medal position. But the competition in this regatta among sailing’s heavyweight division couldn’t be much tighter. First through seventh is alive for the gold medal, while eighth and ninth have a very outside chance at a podium finish.

Paige Railey (Clearwater, Fla.) was forced to battle from behind in both of today’s Laser Radial races, moving from 33rd to 24th in the first and 42nd to 14th in the second. On the strength of her earlier results, including three race wins, Railey can do no worse than bronze. Finishing seventh or better will guarantee her a silver and she can claim gold if Dongshuang Zhang (CHN) falters. 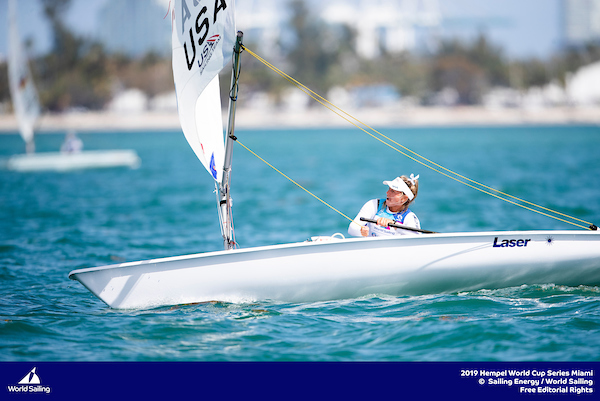 Erika Reineke (Fort Lauderdale, Fla.) started the day very much on the bubble of qualifying for the Laser Radial Medal Race. She stepped up to the pressure with a pair of top-10 finishes.

“I had a chance to get into the Medal Race, so that put a lot of mental stress into it,” she said of today’s racing. “Overall, the whole event has been really, really hard. Really challenging wind conditions, and today was the same. Just trying to keep chugging along, every-boat-counts kind of attitude.”

The breeze has been shifty all week, but Reineke said that focusing on the wind velocity was more important today.

“I thought I stayed in the most wind for the most part,” she said. “I think yesterday I fell out of the big pressure and some the other girls were always a little bit faster because they had more wind. So I just tried to keep my eyes open and look for the pressure. There were spots in the racecourse where there was literally no wind so you had to make sure you were always pointing your boat toward the next shift or pressure.”

With a strong performance tomorrow, Reineke could move up to fifth. But that possibility won’t affect how she approaches the race.

“A Medal Race is like any other race, so you’re going out there to try to win it,” she said. “That’s the only mentality that I have.”

Onshore after two races today, Laser sailor Charlie Buckingham (Newport Beach, Calif.) could breath a sigh of relief. He’s the lone American in the medal race, with an outside chance at a bronze medal and a very realistic shot at fourth overall. 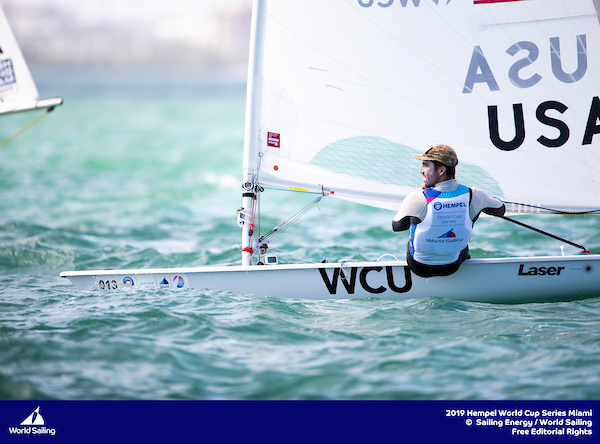 “The conditions were really tough this week and on top of that it was my trials for the Pan American games and the start of the Olympic test event trials,” he said. “The conditions were changing so much it was really hard to stay conservative. You had to take decisions to be at the front. That’s always hard when the decisions are 50-50 or 60-40 and that’s what it felt like all week.”

Buckingham’s metronomic scoreline, which included 10 race results from sixth to 24th, and one 46th, belied the challenge of sailing in the regatta’s deepest fleet. He was pleased with his ability to more consistently sniff out the shifts than most of his competitors.

“My speed was pretty good, I think my starts could’ve been better, but I was making good comebacks when I needed to do it and when I was in the front I was staying up there,” he said. “I think if you’re trusting what you see and going for, and it’s working, that helps you build confidence in your decisions in conditions like that. But it wasn’t that straightforward all the time. I had to have good speed and make some comebacks.”

Chris Barnard (Newport Beach, Calif.) was the second-placed American in 14th, 10 points out of the Medal Race.

Stu McNay (Providence, R.I.) and David Hughes (Miami, Fla.) had an up-and-down day in the Men’s 470 fleet. They dropped to sixth overall, with a slim chance of bronze tomorrow. Lucas Calabrese and Jack Parkin were on the edge of qualifying for the Medal Race, but missed out by 3 points.

In the Women’s 470 fleet, Atlantic and Nora Brugman are ninth and will sail tomorrow’s Medal Race with a legitimate shot of moving as high as fifth. Carmen and Emma Cowles (Larchmont, N.Y.) won a race today, showing flashes of the talent that lifted them to back-to-back world sailing youth championships in the 420 class. They finished 16th, with Nikole Barnes (St. Thomas, U.S.V.I) and Lara Dallman-Weiss in 17th, courtesy of a tiebreaker with the Cowles twins.