Bold Decision Pushes U.S. 49er Team to the Top of the Pack on Day 2

If at first you don’t succeed, try something different. That was the recipe for success today for the American 49er team of Nevin Snow (San Diego, Calif.) and Mac Agnese (Fort Lauderdale, Fla.) who captured a second in their lone race on Day 2 of the 2019 Hempel World Cup Series Miami and now sit in the overall lead by a point over defending class world champions Sime and Mihovil Fantela (CRO).

While the final result in a Hempel World Cup Series regatta is an important achievement for a developing team, sailors often use these events to focus on and test a specific aspect of their game, with the hope of pulling everything together when Olympic qualifying starts later this year. That’s the case with Snow and Agnese.

“Starting has been our main goal this whole month in Miami,” said Snow. “Getting a good start in these really shifty races has led to being able to look outside the boat easier, you’re not in the mix with everybody from the get go. That’s been one of our goals, consistent starting, and in the one race today we made a good start.”

Getting off the starting line with some freedom to maneuver and make decisions was something of a theme today. In the 49erFX, Stephanie Roble (East Troy, Wis.) and Margaret Shea (Wilmette, Ill.) credited their surge to the sharp end of the standings to strong starts in two of three races. They are currently tied on points for second place with the British team of Sophie Weguelin and Sophie Ainsworth. The New Zealand team of Alexandra Maloney and Molly Meech has been nearly unbeatable with two firsts, a second and a fourth so far in the regatta. 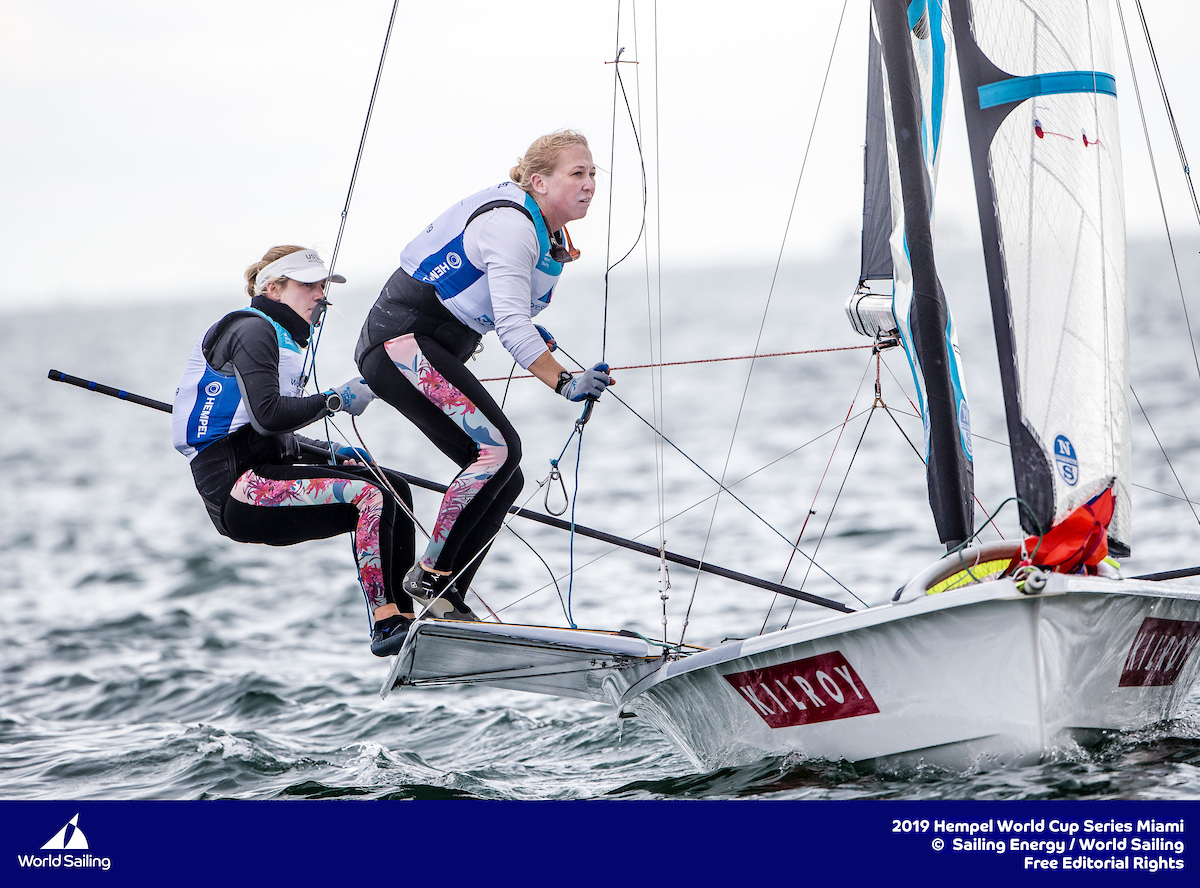 “I think good starts definitely paid off,” said Roble. “If you had a good start and could hold your lane for a little while, you were pretty much guaranteed to be in the top 10.”

While the breeze was light and shifty, Roble said that speed was really important today, perhaps more so than one might expect given the inconsistent breeze.

“It was pretty light and tricky out there, and we were just really trying to focus on good lanes around the course and just trying to use out boatspeed to have good races,” said Roble. “I think the pressure was a bit more apparent [than on Day 1 of the regatta] and it was so light that having just any bit of more pressure than the boats around you or on the other side of the course made the difference. We were focused on getting in the pressure and getting into fat lanes when we had it and using our speed to bring it in. The more you can put your bow down and get the boat rumbling, the better off you are.” 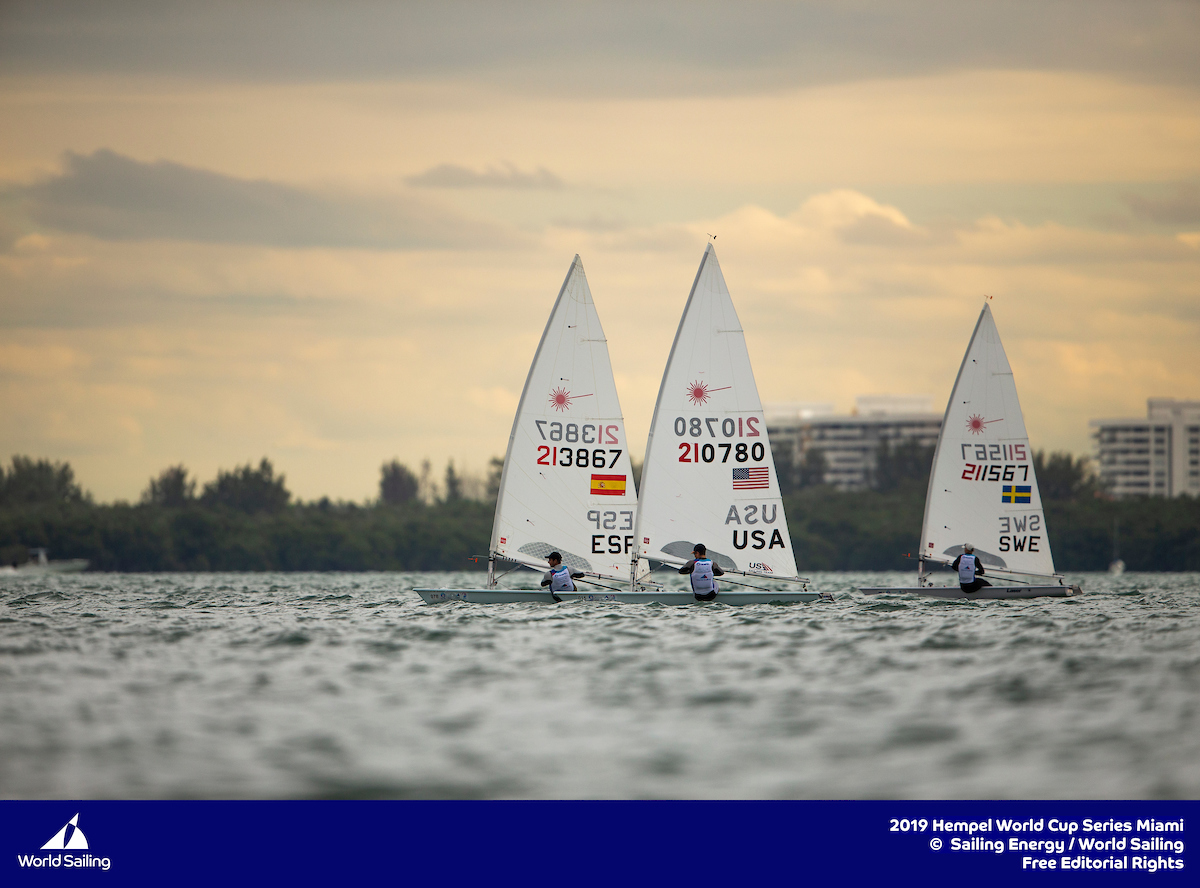 The Laser fleet, the largest of the regatta with over 100 entries, sailed two races today to finish its qualifying series. Tomorrow, the fleet will split into Gold and Silver Fleet racing. Two U.S. sailors are well positioned for a run at Sunday’s Medal Race having each scored all top-10 finishes in the qualifying races. Chris Barnard (Newport Beach, Calif.) is seventh and Charlie Buckingham (Newport Beach, Calif.) is 12th. But just five points separate fifth from 15th in the always-competitive class.

“Today [the breeze] was north northwest, the first race we had 8 to 11 knots, it sort of died off at the end, and then the last race was much lighter,” said Barnard. “With those light, fluky conditions it was good to have two top 10s. You just had to be really aware of what was going on around the racecourse and big picture and stay fast as long as you can.”

With 18 months until the Tokyo 2020 Olympics, Barnard is focused on the big picture. But there’s some pretty attractive carrots dangling at the end of this six-day competition.

“This event, particularly for us, is important to re-qualify for the national team, and it’s the Pan American trials and the first part of the [Tokyo 2020 Olympic] test event trials. So really a lot of our trials are starting with this event. But big picture, we’re on a path of progression and we have 18 months to the Games. We’re not trying to be our best selves right now, but just keep on progressing as the season and the year goes on.”

The Olympics are a unique competition in the sailing world and while there’s no way to truly replicate it, the test event at the Olympic venue this summer and the Pan Am Games in Lima, Peru, are good opportunities to get a glimpse of the experience.

“They’re great honors to be part of those teams, and if I’m fortunate enough to continue sailing well and qualify for those teams, those events will be great experience, and that’ll be really valuable to then hopefully go to the Games,” said Barnard. “But one step at a time, I’ve got a long way to go in this regatta. So I’m just focused on recovering and getting ready for tomorrow.” 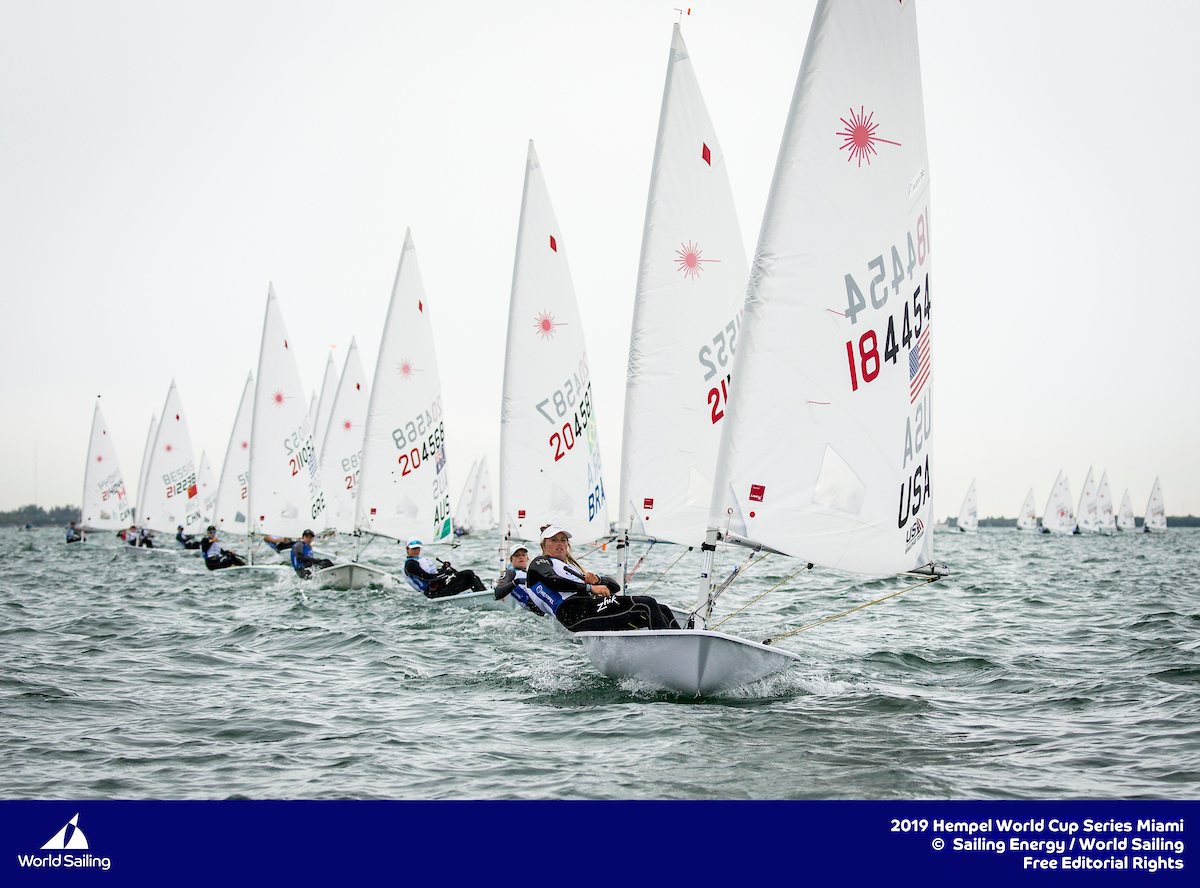 In the Laser Radial class, Erika Reineke (Fort Lauderdale, Fla.) made the most of today’s single race. A fifth place moved her up to 11th place overall, just three points behind Paige Railey (Clearwater, Fla.). That class will get an early start tomorrow as they look to make up for lost races over the first two days.

The Nacra 17 class squeezed in two races toward the end of the day and there is now just four points between the top three American teams. Sarah Newberry and David Leibenberg (Livermore, Calif.) lead the way in 11th place with 40 points. One place, and three points behind, are 2016 Olympians Bora Gulari (Detroit, Mich.) and Louisa Chafee (Warwick, R.I.) with Ravi Parent (Sarasota, Fla.) and Caroline Atwood a point further back.

A 13th in the lone Finn race today, combined with a third yesterday, has Luke Muller (Fort Pierce, Fla.) sitting in seventh. Caleb Paine (San Diego, Calif.), bronze medalist in the class from Rio 2016, is 16th.

Pedro Pascual is the top American in the Men’s RS:X class in 41st. Farrah Hall, who represented the United States at the 2012 London Olympics, leads the U.S. contingent in the Women’s RS:X class. She is 26th. With just two races per class, there is the potential for a lot more racing for the windsurfers over the next two days.

The Men’s and Women’s 470 fleet were unable to get in a race today due to the challenging conditions.

Racing continues on Thursday 31 January at 10 am local time with another packed schedule in a bid to catch up on races lost.