A year and a half ago, with the majestic hills of Rio de Janeiro as a backdrop, Caleb Paine (San Diego, Calif.) proved that he’s not afraid of sporting’s bright lights, claiming the Finn class bronze medal in the Rio 2016 Olympics with a stirring win in the Medal Race. Earlier today, on Biscayne Bay, Paine came up big again when the pressure was its most intense, earning the Finn silver medal in the 2018 World Cup Series Miami, USA.

“For the first event back in the year and a half, it was a great result,” said Paine (above), who officially launched his campaign for Tokyo 2020 this week. “I look forward to improving that in the near future.”

Paine started the Medal Race needing to place one boat between himself and Alican Kaynar (TUR) to move from third to second in the overall standings, while also not letting Ioannis Mitakis (GRE) finish too far ahead. Giles Scott (GBR), the reigning Olympic gold medalist, had simply to finish the race to ensure himself of the gold medal.

Paine put himself in a difficult spot when his start didn’t quite go as planned. Fortunately Kaynar didn’t shine off the line either and both were quickly forced to make clearing tacks and work the right side of the course while the bulk of the fleet streaked off toward the left. While the Medal Race is short, there’s still plenty of opportunity to come back from a bad start as the smaller fleet—10 versus 26 boats in the case of Finn class—makes it easier to find clean lanes. Paine was patient, working past Kaynar on the first beat and then making the decisive move on the final run, slipping past Max Salminen (SWE) and Tapio Nirkko (FIN) to put two boats between himself and Kaynar and claim the silver medal. “I was fortunate to be close enough to those guys [on the final run] and I saw some pressure on the downwind,” said Paine. “I just knew that was my moment to make the jump, and I worked hard as I could to make it happen. Fortunately enough, I was able to pass them by the bottom mark.”

As the top-placing American in the regatta, Paine also earned US Sailing’s Golden Torch Award.

The only other American team to sail on the regatta’s closing day was the Men’s 470 team of Stu McNay (Providence, R.I.) and Graham Biehl (San Francisco, Calif.). McNay and Biehl sailed together in two Olympics, but Biehl retired from Olympic competition after the 2012 Olympics and McNay teamed up with David Hughes (Miami, Fla.) to finish fourth in Rio. With Hughes recovering from a knee injury, McNay called upon his former partner to help him stay sharp. 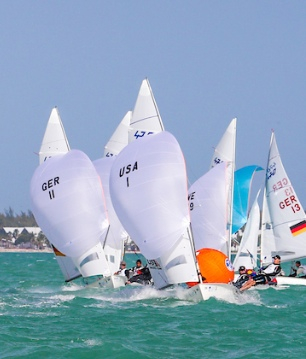 While a seventh-place finish—they moved up one spot with a third in the Medal Race—isn’t up to McNay’s usual standards at this event, which he’s won three times, but the team’s goal this week wasn’t focused on the results.

“The results this week in Miami I think are a good indication of exactly where our team is at, performance wise,” said Malcolm Page, Chief of U.S. Olympic Sailing. “We had one medal here with Caleb Paine in the Finn, but have also had some other class results in single digits. Although this is a marker of where we are today, it’s certainly not an indicator of where we’re going. We are steadily building a process and a system to take America back to the top of the podium.”

Luke Patience and Chris Grube (GBR) just needed to beat one boat to lock up the gold medal in the Men’s 470 division. They beat eight, finishing just behind Panagiotis Mantis and Pavlos Kagialis (GRE) in the race. Kevin Peponnet and Jeremie Mion (FRA) finished seventh in the Medal Race, but were close enough to Anton Dahlberg and Fredrik Bergström (SWE) to hold onto the silver medal position.

“It was an amazing week,” said Peponnet. “We had light winds to begin and that was really good for us because we really want to know how well we were in these conditions, and it turns out we were really good in them. We had very strong winds towards the final days and that also turned out to be good. Overall, we are really happy because we’ve only been sailing together for six months and we’ve done so well.”

If there was a common thread to the five Medal Races on the final day of the 2018 World Cup Series Miami, USA, it was that the hard work put in early in the regatta was the key to victory. In three of the five classes, the leader coming into the day was assured or all but assured of the gold medal due to the advantage build up during the full-fleet portion of the regatta. The leaders in the other two classes had solid, if not invincible, cushions over second place.

All five class leaders going into the day stood on the top of the podium at the end of it. But there was plenty of excitement when it came to the remaining podium positions.

It was the final race of the day, in the Women’s 470 class, that proved to be the most entertaining. Regatta leaders Tina Mrak and Veronkia Macarol (SLO) gave the fleet a hint of hope by rounding the first mark in fourth. But an impressive run, which vaulted them into the lead, all but squashed any chance of another team closing the 13-point gap. The real battle settled on silver and bronze, with three teams—Afrodite Zegers and Anneloes Van Veen (NED), Agnieszka Skrzypulec and Irmina Mrózek Gliszczynska (POL) and Ai Konda Yoshida and Miho Yoshioka (JPN)—separated by 3 points going into the race and a fourth, Amy Seabright and Anna Carpenter (GBR), with an outside chance should two of the three falter. The race turned at the bottom of the second run when Zegers and Van Veen ran into equipment issues with their spinnaker, which required Van Veen to come off the trapeze and spend a few minutes inside the boat. In the breezy conditions, this proved fatal as the fleet streaked away from the Dutch team. The Polish and Japanese teams matched each other for the second lap of the race, with Skrzypulec and Mrózek Gliszczynska maintaining the advantage and locking up the silver medal. With a 10th place in the race, Zegers and Van Veen, the defending champions at this event, dropped from second to fifth. Seabright and Anna won the Medal Race and jumped to fourth in the overall standings.

The Laser Radial was the most wide-open of the five classes, with nine of 10 sailors starting the Medal Race mathematically alive for a medal. Alison Young (GBR) had a five-point advantage over second place starting the day. But the way that Young closed the regatta—with four wins in five heavy-air races—there didn’t appear to be much chance to unseat her at the head of the class with the Medal Race being sailed in much the same conditions as the previous six races, 16 knots and choppy seas.

Young jumped out to the early lead with an impressive first beat. Mári Érdi (HUN) would slip past on the second beat, but second was more than enough for the Briton to clinch the overall title. Emma Plasschaert (BEL) played solid defense to hold on to the silver while Anne-Marie Rindom (DEN) did the same to claim bronze.

With the gold medal locked up courtesy of a 30-point advantage, Tom Burton decided to use the Medal Race to work on his starts. All evidence to the contrary—his results for the week include two race wins and eight top-seven finishes—Burton wasn’t quite satisfied with his ability to get off the line. That item will remain on his worklist as he pulled the trigger just a hair early in the Medal Race and was called OCS by the race committee. Without anything to gain or lose, Burton was content to follow the fleet around the track after re-starting. He finished ninth and still winning the class by 17 points. Nick Thompson (GBR) and Philipp Buhl (GER) were effectively tied going into the race. And Sam Meech (NZL), the bronze medalist from the Rio 2016 Olympics, was lurking just three points back. It all looked good for Buhl (right, in red) when he rounded the first mark in sixth, with Meech in sixth and Thompson (right, in blue) in ninth. But Thompson, who was whistled for a tacking-too-close penalty on the first beat, ground back into contention. It was anyone’s race as the Lasers surfed down the final downwind leg, flicking their bows from side to side and aggressively working the short, steep chop of Biscayne Bay.

In the end, Thompson was unable to dig himself completely out of the hole created by his penalty on the first leg. Like many Olympic veterans in this regatta, however, Thompson is able to look at the big picture.

“Today was a real tricky day in Miami,” said Thompson. “I was tied with three boats going into the medal race. First place was already gone. I knew it was going to be a tough battle but, in the end, I came away with third place. It’s another year where me and Philip had a good battle. I like competing with him. He’s a great sailor.

“The penalty was my mistake. I thought I was probably okay, but the jury ultimately made the decision. Basically, I was coming in starboard and I had a boat going to duck behind me. I tacked a bit too close and that was a bit frustrating on my part. Overall, I am pleased with my performance this week. Just came to work in a few areas, and I walk away with a medal, so I feel pretty amazing.”